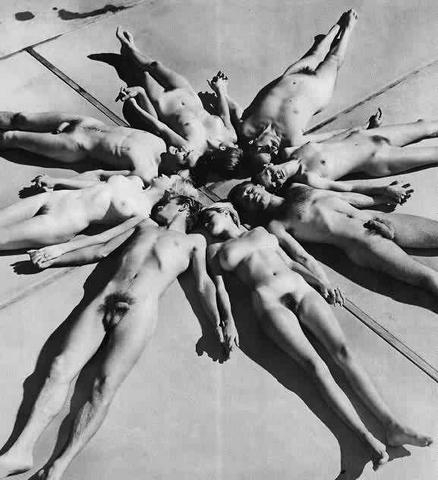 Nudism may be considered “a kind of sport, in which individuals get naked in groups to take a bath of air and light, as one bathes in the sea” (Dr. Toulouse), that is, from a purely therapeutic point of view; it may be considered, as the gymnomystics do (gymnos means nude in Greek), as a return to an Edenic state, restoring humans to a primitive and “natural” state of innocence (the thesis of the Adamites of yesteryear). These two points of view give way to a third, ours: that nudism is, individually and collectively, among the most potent means of emancipation. It seems to us to be something else entirely than a hygienic fitness exercise or a “naturist” renewal. For us, nudism is a revolutionary demand.

Affirmation: to vindicate the ability to live nude, to get naked, to walk around naked, to associate with nudists, with no other care, as one uncovers one’s body, than the possibilities of resisting temperatures. This is to affirm the right to the complete disposition of one’s bodily individuality. It is to proclaim one’s casual indifference to conventions, morals, religious commandments, and social laws that, under various pretexts, keep humans from disposing the different parts of their bodily being as they see fit. Against social and religious institutions in which the use or usury of the human body is subordinated to the will of the lawmaker or priest, the nudist demand is one of the most profound and conscious manifestations of individual freedom.

Protest: to vindicate and practice the freedom to get naked is, indeed, to protest any dogma, law, or custom that establishes a hierarchy of body parts, that considers, for example, that showing the face, hands, arms, or throat is more decent, more moral, more respectable than exposing the buttocks, breasts, belly, or the pubic area. It is to protest against the classification of different body parts into noble and ignoble categories: the nose being considered noble and the penis ignoble, for example. More importantly, it is to protest against any intervention (of a legal or other nature) that obligates us to wear clothes because it pleases another — whereas it has never occurred to us to object that they do not get undressed, if that is what they prefer.

Liberation: liberation from wearing clothes, or really of the constraint of wearing a costume that has always been, and can never be anything but, a hypocritical disguise insofar as it increases the importance of what covers the body — of the accessory — and not the body itself, whose cultivation, however, is the essential thing. Liberation from one of the main notions on which the ideas of “permitted” and forbidden, of “good” and “evil” are based. Liberation from coquetry, from the conformism to an artificial standard of appearance that maintains the differentiation of classes.

Let us imagine the general, the bishop, the ambassador, the academic, the prison guard, the warden — naked. What would be left of their prestige, of the authority delegated to them? The rulers know this well, and this is not the least of the motives for their hostility to nudism.

Release from the prejudice of modesty, which is nothing but “shame of one’s body.”

Release from the obsession with obscenity, currently provoked by the uncovering of body parts that social hypocrisy requires us to keep hidden — freedom from the restraint and self-control implied by this fixed idea.

We will go farther. We maintain, taking up the perspective of sociability, that the practice of getting naked is a factor in better camaraderie, a less narrow camaraderie.

There is no denying that for us a less distant, more intimate, more trusting comrade is the one who reveals her or himself to us not only without intellectual or ethical ulterior motives, but also without hiding their body.